RWU Law dedicates the Professor Anthony J. Santoro Classroom, in honor of the founding Dean of RWU Law and President Emeritus of RWU

BRISTOL, R.I. – It’s one thing to honor a respected colleague and well-loved professor upon his retirement – but how to pay tribute to a man who is, in many ways, the sine qua non of the institution itself; one who is, perhaps more than any other single individual, responsible for the very existence of Roger Williams University School of Law?

At the very least, you name a classroom after him. And so last Friday evening, the former Room 262 at RWU Law was dedicated as the Professor Anthony J. Santoro Classroom, with around 100 law faculty, alumni and current students in attendance.

“Put simply, no one has done more for this law school than Tony Santoro,” RWU Law Dean Michael J. Yelnosky told attendees. “And dedicating that classroom in his honor – the classroom where he used to teach tax [law] to a full house at 8:30 in the morning – seems like the least we can do.” 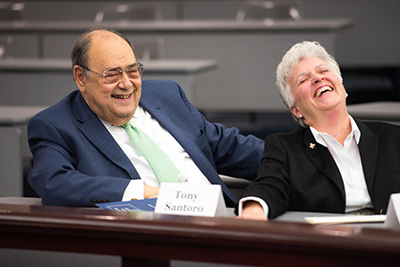 A Georgetown Law graduate, Santoro was the founding Dean of RWU Law (1992-1993), and is a President Emeritus of Roger Williams University (1993-2000). He was awarded an honorary doctorate by the law school in 2016.

Santoro’s association with Roger Williams began in 1990, when he was tapped to conduct a feasibility study for establishing a law school in Rhode Island. By that time, Santoro had already been instrumental in establishing two others: the University of Bridgeport School of Law (now Quinnipiac), and Western New England College School of Law. In addition, as Dean of the Widener University School of Law, he had engineered a major expansion from Delaware into Pennsylvania. Santoro also knew the lay of the land locally: he’s a native of Melrose, Mass., and former resident of Fall River, Mass., and his wife Pauline -- with whom he has four children -- is a native Rhode Islander.

Santoro’s study concluded that “a law school would enhance the legal culture of Rhode Island and provide opportunities for research and continuing legal education which are not now available in this state.” When he was later appointed as the school’s first dean, he lobbied hard for a dedicated physical facility, and almost singlehandedly recruited the entire founding faculty. By opening day, he was the President of Roger Williams University.

More than two decades later, Santoro remained a highly popular teacher and is the namesake of the yearly Professor Anthony J. Santoro Business Law Lecture, the school’s first entirely alumni-endowed lecture series. As the Roger Williams Law Review noted in 2014, “His long tenure here suggests that the last law school established by Dean Santoro was arguably his finest, and the state-of-the-art facility he envisioned some twenty years ago stands as a testament to his efforts.” 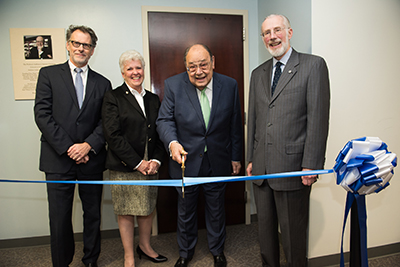 During his remarks at the dedication, Dean Yelnosky pointed out just how pervasive the law school’s reach has become, with successful alumni practicing across the country, law students clerking at the 1st U.S. Circuit Court of Appeals and in dozens of other courts, and finalists in the latest installment of the school’s annual Esther Clark Moot Court Competition having just recently argued before all the justices of the Rhode Island Supreme Court in their breathtaking Providence chambers.

“Look at where his [Santoro’s] law school is today,” Yelnosky said. “This is a remarkable community that Tony has created. He had a vision, he had the talent and he had the energy to make this happen.” 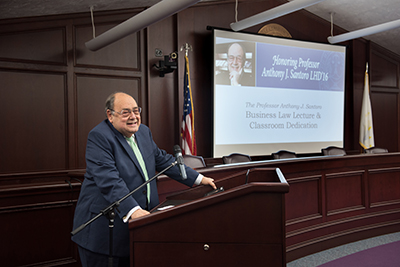 Santoro thanked the faculty, alumni and students, in turn, for having “been so instrumental in my having the best time of my life during these last 25 years – especially the last few as a faculty member. I really enjoyed that classroom and I am so thrilled to have [it] named after me. Thank you all.”

Prior to the dedication and reception, RWU Law hosted its annual Anthony J. Santoro Business Law Lecture, this year entitled “Business Lawyering: The Skill of a Lifetime,” and featuring a panel of RWU Law alumni whose careers were profoundly shaped by Santoro’s teaching and mentorship. Following the dedication, alumni and friends gathered at Aidan’s Pub in downtown Bristol to celebrate Alumni Night.

[With reporting by Edward Fitzpatrick and Alexander Bowden. Photos by Andrea Hansen.]

At the dedication ceremony, RWU School of Law Dean Michael J. Yelnosky recalled that the law school opened in 1993 at about the time that a chief judge of Rhode Island Supreme Court was resigning in the face of impeachment proceedings. It marked the second time in seven years that the state’s top judge had resigned amid the possibility of impeachment. Common Cause Rhode Island had asked Yelnosky to participate in a judicial reform movement, so he was about to write an opinion piece criticizing the status quo and defenders of the status quo. Before submitting the piece, he thought to ask Santoro if he should take this on.

“He listened to me and did not hesitate,” Yelnosky said of Santoro. “He quickly said, ‘That’s one of the reasons the law school is here. By all means – you have my support. Do what you think is best.’ ”

Yelnosky said, “Tony showed me that day what it meant to stand up for academic freedom, which is not an easy thing to do when an institution is in its infancy, when it’s trying to establish roots in unfamiliar terrain and where it’s trying to win over not an unsubstantial number of skeptics.”

Professor Anthony J. Santoro told the story of how former U.S. Supreme Court Justice Oliver Wendell Holmes Jr. took a train from Washington, D.C., one day when he was getting older. As the train pulled from Union Station, a conductor asked the judge for his ticket. Holmes searched his coat pocket, his vest pocket, his brief case, but couldn’t find the ticket. So the conductor told him not to worry about it – to just send in the ticket when he found it. Holmes stood up, glared at the conductor and said: “You dolt. I don’t give a damn about your ticket -- I just want to know where I’m going!”

Santoro drew laughter when he said he feels the same way now.

“In two weeks, I will be 50 years at the bar, 47 years as an academic, 46 years as a husband,” Santoro said. “Now, I don’t know what is going to happen to me in the future. I’m not taking up golf. I’m not taking up photography. But I do have one big fear. Now that the university has honored me by naming the classroom and bestowing upon me the rank, if you will, of president emeritus or professor emeritus, I am deathly afraid that after two months of feeding me breakfast and lunch, Pauline is going to make me husband emeritus.”

If you are interested in making a gift in honor of Professor Santoro and his signal contributions to the University and the School of Law, your gift will be applied to our Professor Anthony J. Santoro Campaign goal of $100,000.