Formed through a partnership between RWU Law and the Federal Bar Association, the Litigation Academy offers experience for new lawyers, while serving the court and public with higher-quality representation.

Chanise Anderson stood before a judge in Providence, Rhode Island, trying to get a critical piece of evidence admitted in a breach-of-contract lawsuit. Despite her professional self-assurance and a recent law degree from New England School of Law, she was struggling to lay the proper foundation.

Fortunately for Anderson, her client was in no danger of losing a costly court case. After Anderson sat, the judge and a team of seasoned litigators gave detailed feedback on her performance.

Anderson was attending the Litigation Academy, a novel training program for lawyers that is set in a federal courtroom.

“The case was so real, so alive that I had to remind myself it was a role play,” said Anderson, a medical malpractice lawyer in Milton, Massachusetts. “In real life, it’s win or lose, but here, it was okay to make mistakes and learn from them.”

“When you know the nuts and bolts, you’re free to think on your feet,” said William E. Smith, Chief Judge of the U.S. District Court in Rhode Island, and chair of the Roger Williams University School of Law's Board of Directors. “You can’t learn that in a lecture. There’s no substitute for actually standing at a podium, with a real witness in the box, and a real judge on the bench, and having to actually do it.

The Litigation Academy was formed in partnership with RWU Law and the local chapter of the Federal Bar Association, in response to shrinking courtroom opportunities for young lawyers.

“All the lawyers from my generation, we had mentors who taught us skills, and then we got a chance to practice,” said Smith. “We got to examine witnesses and write briefs. We got to work on way more sophisticated things” than lawyers entering the profession today. 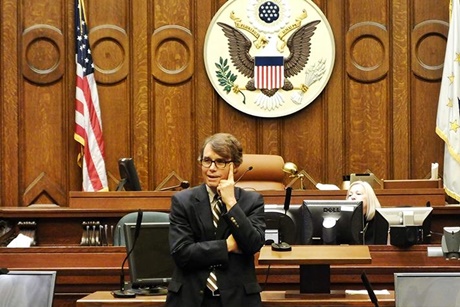 “When you know the nuts and bolts, you’re free to think on your feet. You can’t learn that in a lecture.”

James Crowley, who graduated from Columbia University Law School in 2014 and works for a fair housing nonprofit in Pawtucket, Rhode Island, said the four-day program filled many holes in his early trial experience.

“There was a real element of pressure. You’re in a real courtroom, standing in front of a real judge,” Crowley said. “They did as good a job as you could possibly do to make it realistic.”

Niki Kuckes, a law professor at RWU Law and the Academy's co-director, said she eagerly responded to Judge Smith’s invitation to help create the curriculum.

Most law school graduates, she said, are comfortable with research, writing, and arguing legal motions, but “other skills are much more challenging to teach in law school — for example, working with and questioning witnesses, and dealing with juries. Those are some of the skills we were targeting in this program.”

The first Litigation Academy, held in 2014, focused on depositions. The most recent program, held last fall, took the lawyers through a fictitious case involving two estranged business partners. Relying on lectures, demonstrations, and feedback, the lawyers prepared witnesses, engaged in direct and cross examination, and mastered the deceptively challenging task of entering exhibits into evidence.

“The actors are great. They are very close to typical witnesses,” said Brooks Magratten, a Providence lawyer, Academy co-director and RWU Law adjunct professor. “After the judges and lawyers finish their critiques, the actors also offer advice, focusing on the lawyer’s voice and posture.”

Magratten said the FBA chapter helps to finance the program, which also charges a fee to participants, and it recruits attorney mentors at no charge. “Once lawyers have been on the faculty once, they want to keep coming back,” he said.

Anderson, who is seeking to transition from “second chair” to lead attorney, called the experience invaluable. She was particularly struck by her instructors’ generosity.

“It was very inspiring that they would invest so much time in helping future litigators,” Anderson said. “The number of lawyers and judges who spent four days pouring knowledge into us was priceless.”

The Academy has developed four programs: Direct and Cross Examination, Depositions, Opening Statements and Closing Arguments, and Mediation. The next Academy, focusing on depositions, is planned for April 25-27. Additional information on previous events is available on the court’s website.

Smith said the Litigation Academy is more elaborate and hands-on than most Continuing Legal Education programs, but other chief judges have expressed interest in hosting similar training.

This article originally appeared on the United States Courts homepage.